Shopping Cart
Your Cart is Empty
Quantity:
Subtotal
Taxes
Shipping
Total
There was an error with PayPalClick here to try again

Thank you for your business!You should be receiving an order confirmation from Paypal shortly.Exit Shopping Cart

Suppression is spreading across Australia

You may think that the 3 blandly named Bills before Parliament in June 2018 have nothing to do with Justice for Children or any community movement you might contribute to in any way.

These Bills are dangerous threats to democracy..

Thanks to Cathy Wilcox for these cartoons - better than 1,000 words! 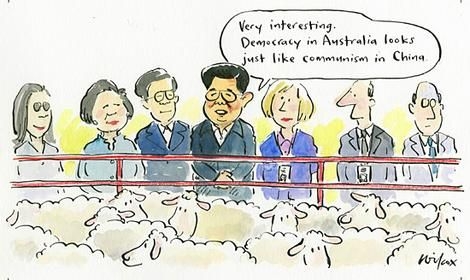 The government is trying to stir up fear that dissent = foreign interference and/or not agreeing with government activities = being a front for an opposition party. To quote from Greenpeace: "What does crime look like to you? Does it look like thousands of people having conversations about how we can help keep our planet healthy, end human rights abuses and stand up against destructive mining?"

J4C says: "Does it look like children and their supporters asking to have a voice and a choice in Family Law?"

The Turnbull Government think they can silence opposition with new laws that could make peaceful protest illegal. They’re actively trying to stifle your ability to speak out on the issues you care about."

For years, the Family Law system has lead the way in silencing and suppression. Individuals, organisations and media outlets are too scared to speak out about the children who being damaged and abused every day by decisions made by Judges in the Family and Federal Circuit Courts.

Decisions about children's welfare, wellbeing and happiness MUST be taken out of the adversarial legal system NOW!!

Appalling separation of children from their parents nothing new in Australia

How many children have been removed from loving caring parents - especially in our experience, mothers - by Family Court and even child 'protection' rulings?

In the USA, the same thing happens and now the President is trying to trump Australia's harsh and inhumane policies towards asylum seekers. At least Melania, his wife, is speaking out somewhat.

Where is Lucy Turnbull or any other government Minister's partner in all this?